A History of Italian Economic Thought 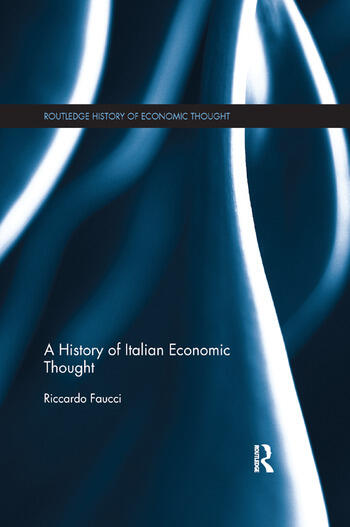 A History of Italian Economic Thought

This book provides the non-Italian scholar with an extensive picture of the development of Italian economics, from the Sixteenth century to the present. The thread of the narrative is the dialectics between economic theory and political action, where the former attempts to enlighten the latter, but at the same time receives from politics the main stimulus to enlarge its field of reflection. This is particularly clear during the Enlightenment. Inside, this book insists on stressing that Galiani, Verri, and Beccaria were economists quite sensitive to practical issues, but who also were willing to attain generally valid conclusions. In this sense, "pure economics" was never performed in Italy. Even Pareto used economics (and sociology) in order to interpret and possibly steer the course of political action.

Within this book it illustrates the Restoration period (1815-48). There was a slowdown of the economists' engagement, due to an adverse political situation, that prompted the economists to prefer less dangerous subjects, such as the relationship between economics, morals, and law (the main interpreter of this attitude was Romagnosi). After 1848, however, in parallel with the Risorgimento cultural climate, a new vision of the economists' task was eventually manifested. Between economics and political Liberalism a sort of alliance was established, whose prophet was F. Ferrara. While the Historical school of economics of German origin played a minor role, Pure Economics (1890-1940 approx.) had a considerable success, as regards both economic equilibrium and the theory of public finance. Consequently, the introduction of Keynes's ideas was rather troubled. Instead, Hayek had an immediate success.

This book concludes with a chapter devoted to the intense relationships between economic theories, economic programmes and political action after 1945. Here, the Sraffa debate played an important role in stimulating Italian economists to a r

1. General problems of interpretation 2. Machiavelli to Genovesi 3. The heyday of eighteenth century Italian economics 4. Strengths and weaknesses of the early Ottocento 5. Francesco Ferrara and the economic schools in Italy (1850-1890) 6. Pure economics in Italy (1890-1920) 7. The Post-Pareto generation (1920-45) 8. Post-war and recent decades